Sencha Touch is a HTML 5 framework that allows you to create cross platform mobile apps. When used with cordova you can build HTML apps that look and feel like a native app allowing you to cut down in your development time and budget. The frameworks learning curve is a little steep but once you get it down, development is quick and painless.

To get started we are going to need to download a couple things and get our environment set up. It might seem like a lot, but once you are set up you should be able to create Touch projects quick and easy. Here is what we need to download:

Now that we have everything downloaded, install MAMP to get your server up and running, and install sencha cmd. Once sencha cmd is installed run the following cmd:

You should see something like this in your terminal: 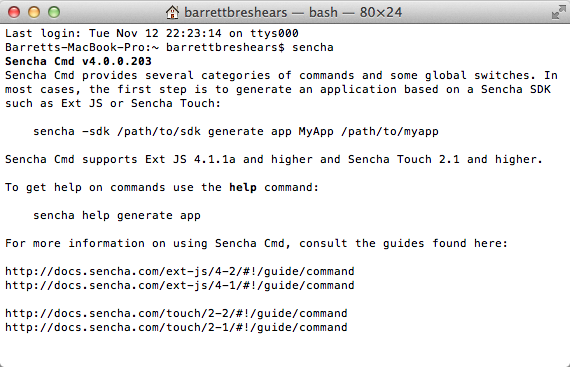 This means sencha cmd is installed correctly and you we are getting close to creating our app.

Next take your sencha touch sdk download  and unzip its contents into you web server directory, put mine under a touch directory. This will allow you view documentation and demo apps locally on your machine, as well as a good getting started guide http://localhost/touch/SETUP.html.

Now that everything is set up lets build our app! We will be using sencha cmd to scaffold out the app. The command we are going to use is:

And thats it, your app is created. With your web server running navigate to your project. It should look like this: 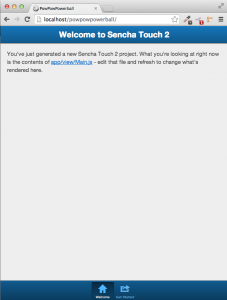 Take a look inside your project and you will see what sencha cmd has built out. Below is the basic layout of the project.

Thats it, now get started building out your app!